Cavs' McCullum Will Feel at Home for the SBC 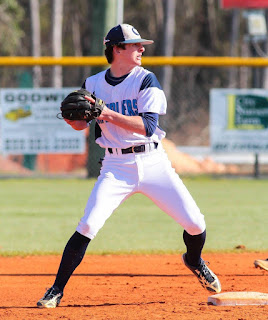 Robert E. Lee Academy's Jenkins McCullum will have a longer ride to school in the mornings than he will home from his games during the week of April 15.  McCullum and his Cavalier teammates will be participating in the 2019 Southeastern Baseball Classic at The Jimmy.  McCullum lives in Ashland, which is mere minutes from Kelleytown.

As McCullum makes his place in the pantheon of Robert E. Lee baseball legends that includes dominant pitchers Brian & Darren Adams, the longball launching slugger Chad Wilkes and current North Greenville University coach Tyler Jackson (among many others), it's worth noting the incredible accomplishments McCullum had as a youth player in Hartsville.

McCullum was a member of the 2013 Minor League and 2015 Majors Dixie Youth World Series Championship Teams at Hartsville Northern.  Among his teammates on those teams were current Hartsville players Owen Taylor and Roddi Morris. On those teams, McCullum was just as likely to hit a home run as he was shut a team down on the mound or make an outstanding play in the field.  His versatility was critical for the team's success as they ran through competition from all over the Southeast.

Jenkins familiarity with The Jimmy and Hartsville's team should make him feel right at home during the Southeastern Baseball Classic.

You can see Jenkins and his Cavalier teammates at the SBC:


Join Us At The Jimmy!


For the 2019, Southeastern Baseball Classic game schedule, click here.  To visit the official SBC home page, click here.  "Join Us At The Jimmy" is a blog associated with the Southeastern Baseball Classic and its goal is to make people more aware of teams and players visiting Hartsville for the SBC, as well as introducing our guests to the traditions and uniqueness of our town and tournament.